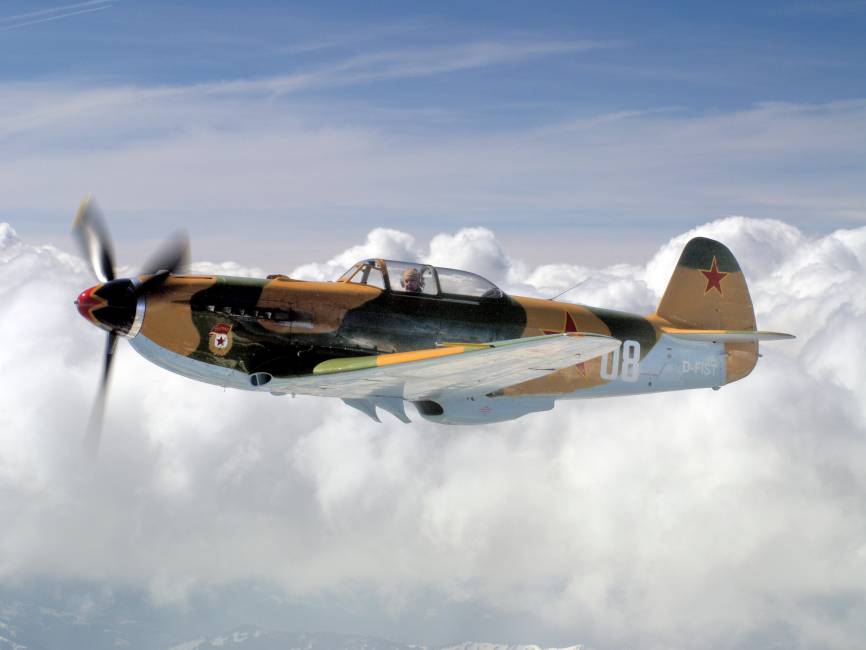 The Yak-9 is widely recognised as one of the best fighters of the Second World War. While this is clearly a sweeping statement (and of course within individual types of aircraft, there were a wide variety of models, differing greatly from each other in performance), we feel it is broadly true.

By virtue of its exceptionally small size and therefore very high power-to-weight ratio coupled with powerful controls, a Yak-9 will out manoeuvre, out-climb and out-run all its direct competitors such as the P-51 and Spitfire, as well as Me109 and FW190. In particular, it has exceptional performance at low level, which is of course of much greater interest in terms of today’s usage.

It was the late autumn of 1939. Adolf Hitler had precipitated World War Two by attacking Poland on the 1st September, using a ‘false flag’ attack on a radio station at Gleiwitz on the Polish/German border to trigger hostilities. Shortly afterwards, Poland was overrun, and Russian troops poured over the eastern border, in response to a secret protocol to the Russo-German Non Agression Pact. Stalin and Hitler divided the spoils, and Poland was rent asunder.

Stalin was under no illusions as to the likelihood of Hitler stopping his eastward surge in search of ‘Lebensraum’ – satisfying the implied right of the German people to take what land and resources it needed. In order to buy time, Stalin kept the trade agreements between the two states in place. The grain shipments from the Russian heartland, and the fully-laden trains of crude oil from the Caucases fields, continued to run past Brześć and Warsaw, and on towards Berlin. Stalin had made many terrible decisions – like purging and causing the death of more than one MILLION of his own people during the period 1936 – 1939. Indeed, this left the Soviet Army and Air Force very weak, due to the fact that so many senior officers had been shot.

At the same time, Stalin was urging one of his aircraft designers, Alexander Yakovlev, to even greater efforts to produce a new fighter aircraft, in order to make up for the deficiencies in the V-VS, Voenno-Vozdushnye Sily, the Soviet Air Force. Rushed into production before it was properly tested, the Yakovlev-1 was the smallest fighter that could be designed by the Yokovlev OKB (his design bureau), around the Klimov M-105P engine. Interestingly, like another famous Russian engine, the Shvetsov M-25 which powered the IL-16 fighter and was based on the Wright Cyclone, the Klimov was also based on a foreign design. In this case, it was the French Hispano-Suiza 12Y, a liquid-cooled V-12, which the French granted a production license for. This was originally produced as the Klimov M-100, but the Russians soon boosted this 37 litre V-12 to around 1,050 hp, and this type was fitted to the first examples of the Yak family of fighters; later versions of the Yak-1 had the M-105PF producing 1,260 hp and pushing the fighter to 373 mph. This was almost identical in speed and range to its contemporary, the Spitfire. A family of fighters it was, indeed, for over 37,000 examples were built of the Yak-1, -7, -9 and -3 (the -3 was produced AFTER the -9). The Yak-1 had a steel frame with wooden wings and plywood skinning, except for the control surfaces which were fabric-covered metal.

Here we can see what appears to be a late-war Yak-9U, a variant of the basic airframe which took advantage of a number of advances, including metal wing structure, aerodynamic improvements and the Klimov VK-107A engine. The designer Klimov had taken the French engine to the ultimate stage of development, which meant that it now produced 1,650 hp. Unfortunately, this was a step too far, as the engine threw oil, vibrated badly, and was unreliable! The first examples reached the frontline by May, 1944, and despite valiant efforts by the engineers and mechanics, still gave problems. However, such was the demand for performance – the top speed of the -9U was 415 mph – that the aircraft was persisted with. It was a match for the German Bf109-G and the Fw-190A-4, the only problem being its slightly ‘light’ armament of 1 x 20 mm ShVAK cannon and 1 x 12.7mm (.5″) Berezin UBS machinegun. The Yak-9 family of fighters lasted into the post-war period, and were assigned the NATO reporting name of ‘Frank’. Many were encountered during the early fighting in the Korean War; indeed, Ensign E.W. Brown, flying a Grumman F9F Panther off the USS Valley Forge shot down a Yak-9 near Pyongyang, on 3rd July, 1950 for the US Navy’s first kill in Korea.

Actually, what you are looking at is a clever reproduction – or maybe even a little more than that. A factory in Orenberg, Russia, which had produced Yakovlev fighters during WW2, was persuaded to produce a limited run of NEW fighters. The total production run was just 26, and the last was built in 2005. You could order a Yak-9U (designated -9UM) as a two-seater, or a Yak-3 single-seater. Of course, there were no VK-107 engines available at this time. However, it so happens that the Allison V-1710 is a similarly-sized V-12, and can put out around 1,400 hp, and since there is a LARGE spares inventory still available in the U.S.A, it is a logical choice to replace the Klimov.

This particular aircraft is painted to represent a Yak-9 of the famed Groupe de Chasse GC/3 “Normandie-Niemen”, a Free France unit which fought on the Russian Front. A clue to this is the propeller spinner which is painted in red, white and blue concentric circles, to represent the French roundel. Also, if you walk around to the port side of the aircraft, you will see that there are a series of Swastika ‘kill markings’, which would be how victories over German aircraft would normally be represented. However, a Russian pilot would NEVER do that! Kills were always shown as Russian stars – a strange convention, indeed.

I photographed this Yak at the Tennessee Aviation Museum, Sevierville, TN, where it was visiting. A splendid example of a highly significant WW2 type.