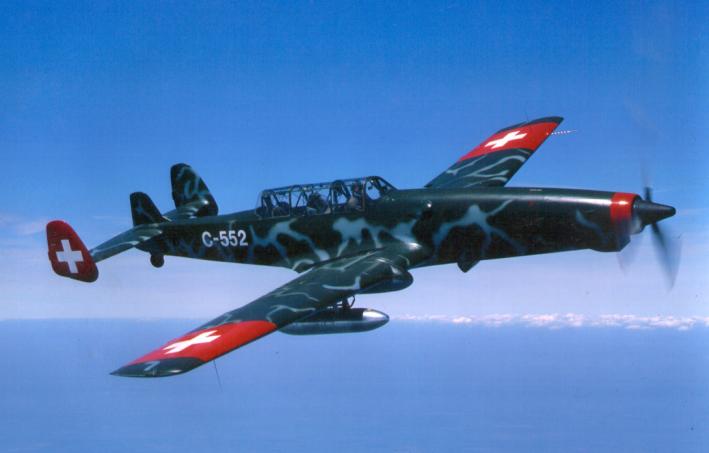 This aircraft is dissasembled and in storage at Gransden Airfield. A very good complete aircraft project.

The design of this Swiss aircraft goes back to 1939 when the prototype two seater EKW C-3601 first flew. Fitted with twin fins, the aircraft was powered by a 1000 hp Hispano-Suiza HS-51 12Y piston engine, and was designed for multi purpose roles – including that of fighter, ground attack and light bomber. This prototype was destroyed after only a few flights, but had shown sufficient promise for further development.

The all metal design was put into production by the Federal Eidg. Konstruktions Werkstatte (EKW) aircraft factory at Thun as the C-3603, and was one of the first home designs put into large scale production for the Air Force. The aircraft was fitted with two machine guns in the wings, plus a rearward facing one operated by hand by the second crew member/observer. Over 150 were delivered to the Swiss Air Force from 1942, being used to patrol Switzerland’s neutral air space (along with Swiss Messerschmitt 109’s), with six squadrons being equipped during World War Two, the C-3603’s served until 1952 when they were replaced by DH Vampire jet fighters. In the late 1940’s twenty were converted as target tugs, plus a further twenty in the early 1950’s, remaining in this secondary role for a further fifteen years. The aircraft were now beginning to show their age, and the Swiss Air Force sought a replacement. Instead of a new type, a C-3603 was re-engined by FlugzeugWerk (F + W) at Emmen with a 1,100 hp Lycoming T53-L turbo-prop, housed in an extended nose. This necessitated the addition of a third tail fin, as well as other minor modifications. Trials with the prototype during August 1968 were satisfactory, and a further twenty three conversions were undertaken by F + W between 1969 and 1973 – the type now becoming the C-3605 Schlepp [Basic translation = Tug]. Although not as fast as the C-3603, this did not matter in its new role. The Schlepp continued to serve the Air Force as a target tug until fatigue problems began to show up in the mid 1980’s, resulting in the types withdrawal from military service in the summer of 1987. Most were then sold off at auction at Lodrino in December 1987.

This a/c is in the UK and has an expired British permit to fly, cockpits are well presented. Beautiful flying characteristics.

(“Tug”) or “Alpine Anteater”, was a target towing aircraft operated by the Swiss Air Force from 1971–1987. The aircraft was developed during the latter half of the 1960s by the Swiss Federal Construction Works (Eidgenoessische Konstruktionswerkstaette) (EKW), renamed Farner Werke (F+W) in 1972, as a conversion of the existing C-3603 ground attack/target towing aircraft. Following a successful prototype conversion in 1968, 23 craft were converted between 1971–1973 with some still flying to this day in private hands.

In 1967 the Swiss Air Force determined that their C-3603-1 target-towing aircraft still had approximately 10 years of structural life remaining, but that the plane’s Hispano-Suiza piston type engines were on the verge of wearing out, with replacements becoming scarce. The C-3603-1 was based on a World War II era ground attack design which had been inspired by the design of the Messerschmitt Bf 109.

Evaluations of various types of foreign aircraft were conducted to find a replacement; however, it was determined in 1965 that the most economical solution would be to re-engineer the existing aircraft with a modern turboprop engine. Accordingly, work began under the direction of Jean-Pierre Weibel to convert the 102nd C-3603 into the prototype C-3605.

The selected replacement engine was a Lycoming T53 turboprop. This was much lighter than the piston engine of the C-3603 and so the conversion included an extension of the nose of the aircraft by 1.82 metres (6.0 ft) to maintain the center of gravity. The remainder of the aircraft was left essentially unmodified. Early flight testing of the prototype began on 19 August 1968. During testing it was found that a third vertical stabiliser was also required.

Flight testing showed that the prototype C-3605 possessed satisfactory flight characteristics, and the conversion of 23 C-3603 aircraft to C-3605 standard began.[1] The aircraft were delivered by F+W between 1971 and January 1973. Whilst in the service of the Swiss Air Force the C-3605s were usually painted in conspicuous yellow-and-black striped, high-visibility colour schemes.

The plane operated faithfully in the target towing role, exceeding its expected 10 year structural life.However, by the mid 1980s, the aging aircraft had begun to show signs of airframe fatigue. This led to the decision to retire the type from service in 1987 with the surviving aircraft being sold off and replaced by converted Pilatus PC-9s in the target-towing role.

C-3605s are displayed in several museums, including the Flieger Flab Museum (Aviation Museum) in Dübendorf, Switzerland and the Planes of Fame Museum in Chino, California. The C-3605 is also popular as a “warbird” with civilian owners.